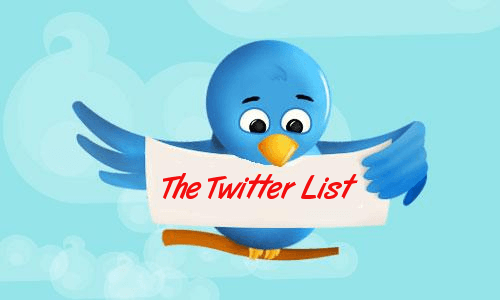 Twitter strategy for most people has to do with how tweets are crafted. Where should the link be placed in a tweet? How often should we share?

As often as these points are deliberated, it’s easy to overlook how Twitter is a two-way street. It’s as much about listening and consuming content as it is about sharing our own. One of the biggest complaints I’ve heard from friends, and even employers, is how there’s little value in Twitter. There’s too much noise or it’s nearly impossible to keep up with the firehose of information.

How could someone truly “follow” 500, 1,000 or even over 5,000 people on Twitter? Are they really following or paying attention?

Twitter lists aren’t new at all and have been around as long as I can remember using Twitter. Lists are rarely mentioned in any Twitter strategy conversations but I honestly can’t think of a better way to funnel the firehose of content. Lists are truly one of the basic Twitter tools easily overlooked by the average community manager or even casual content consumer.

If you follow 1,000 people on Twitter like I do, just keeping up with what’s being said is impossible. It’s easy to miss something. However, grouping who I follow into lists helps me stay on top of what’s going on without burning through a lot of my time.

To me, Twitter is just as much about nurturing relationships as it is keeping up with the news. Being able to efficiently keep track of different contacts and friends helps maintain some of those relationships. Even if I can’t reply “in the moment,” it’s a nice touch to shoot an encouraging @ reply to someone or contribute your thoughts on an opinion to a friend, client or sales lead may have shared that day.

Working in the influencer marketing space, we work a lot with bloggers and other online influencers. In that space, relationships matter as much (if not more so) than in the traditional media space. Bloggers want to work with people they know and trust and are very resistant to parachute marketing tactics. As a PR pro, setting up lists of different blogger contacts and being able to quickly scan, keep track and reply to what’s going on in their lives is a great way to keep a line of communication going and have a more fruitful professional relationship down the road.

The Case for Private Lists

I’m a huge proponent of private lists. I remember the “Top 8” in the MySpace days and how there was somewhat of a pressure of how I publicly classified my friends. I hated it. Having a public list of my friends, to me, brings back those Top 8 moments I had in college. In addition, having private lists provides a competitive advantage professionally. If you keep lists of sales leads, client contacts or blogger relationships, those are relationships you don’t always publicly share. In a B2B setting, you wouldn’t want a competitor to looking over your shoulder at who you’re trying to win business with. This is where private lists are worth their weight in gold.

Content is abundant. Content creators are still heralded but the proliferation of content has paved the way for a new online hero: the content curator. Setting up Twitter lists for people to subscribe to can help establish yourself as a quality curator. Others who follow you won’t have to create their own lists from scratch if you already have quality lists established. It’s a great value-add to provide your growing online community.

How about you? Do you use lists? If so, how?