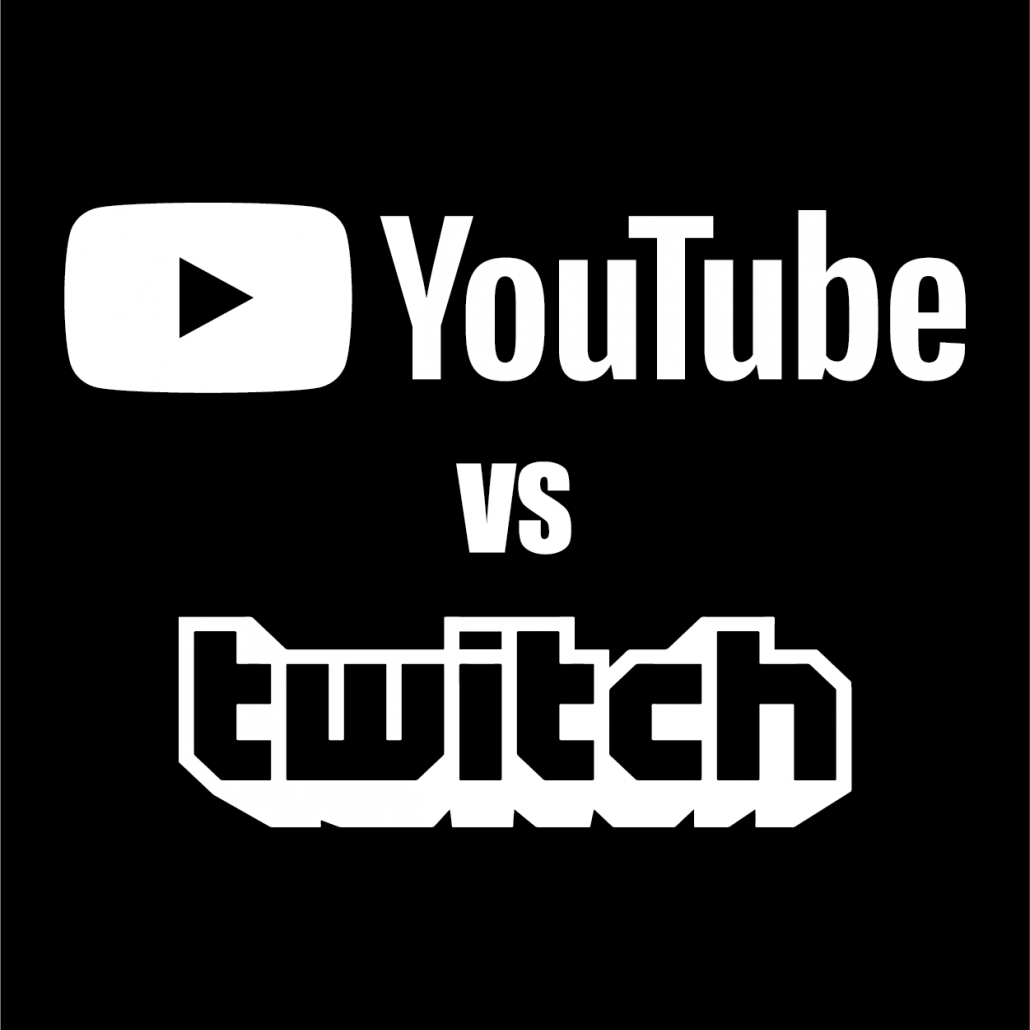 When it comes to gaming, it’s hard to tell what platform your audience is going to be watching. Should you back influencers who post Let’s Play videos that can be visited again and again? Or is a livestream the way to go? Here at Sideqik, we’ve broken down some of the pros and cons of both mediums and platforms.

To Stream or not to stream?

Streaming came onto the scene in the early 2010s thanks to Twitch and has been gaining steam ever since. Now, Twitch boasts about 10 million daily active users with about 106 minutes of streaming watched per person per day. YouTube jumped on the gaming wagon in 2015, introducing YouTube Gaming.

Demographics for just YouTube Gaming are hard to find, but Twitch says that 75 percent of their users are male, with 73 percent between the ages of 18 and 49. That’s a core demographic for many brands.

Despite Twitch’s dominance in the world of streaming, (StreamLabs reports that Twitch boasts more than 15,000 average concurrent streamers and more than 743,000 average concurrent viewers,) Twitch’s growth is lagging. According to StreamLabs’ Q1 2017 report, between March and April 2017 YouTube Live saw a 36.6 percent increase in weekly streamers, versus Twitch’s 4.1 percent increase.

The case for traditional video

While there’s something exhilarating about watching skilled gamers duke it out in real time, there’s just more variety when it comes to traditional videos on YouTube. There’s Let’s Plays, walk-throughs, reviews and first reactions. Jokes about Skyrim draw a different audience than competitive Call of Duty and that’s OK.

Twitch contests the idea that YouTube has more options, boasting that streamers on the site engage with games of all types as well as user-generated and chat-based content, creative streams and something called “social eating.” But still, when it comes to a one-stop-shop for all your video needs, YouTube reigns supreme.

Beyond the variety, YouTube’s traditional format allows for more engagement. Videos on YouTube remain online seemingly forever, meaning someone looking for a Let’s Play of 2013’s Mass Effect can find a video recorded five years ago when the game was new. Twitch allows users to archive their streams for later viewing, but it’s unclear how much that adds to engagement.

If you break it down by dollars, influencers with a larger YouTube following are more valuable than those with a popular Twitch channel, according to Sideqik’s data.

Take user Nightblue3, whose real name is Rabia Yazbek. Rabia has amassed a massive following playing League of Legends on YouTube and Twitch. As seen below, he averages more than 4 YouTube videos a week and almost 23 hours of streaming on Twitch. Despite drawing in an average of 12,500 people watching those streams, Nightblue’s earned media value on a YouTube video is more than 30 times higher. 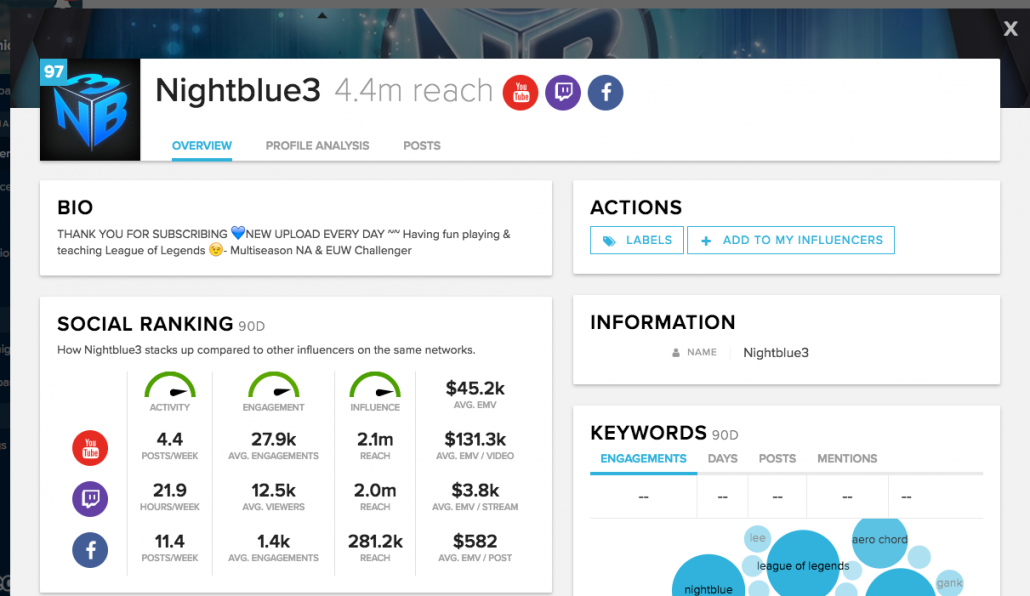 On both accounts, Nightblue has a reach of more than 2 million, but the level of engagement that YouTube enables means those eyes on YouTube just count for a bit more.

At the end of the day, no one network is better. Twitch dominates the world of real-time gaming. For brands, this means people are engaging over a long period of time and hearing a lot about your service or product.

On the other hand, YouTube allows viewers to revisit content more easily and still engage with the videos no matter when they’re finding the influencer.

Ultimately, data suggests video of any form — be it live or recorded — is a strong platform for influencer marketing. The best marketing strategies include a diverse distribution network that will mix both live video and traditional posted videos.

What matters is that you know the value of your influencers.

Take user KNekro, seen in the image below, who has a reach of over one million. Sideqik’s analytics allow you to decide before you contract with the influencer that you’d prefer he posts a YouTube video, which gets many more views than his limited streams over the course of a week. 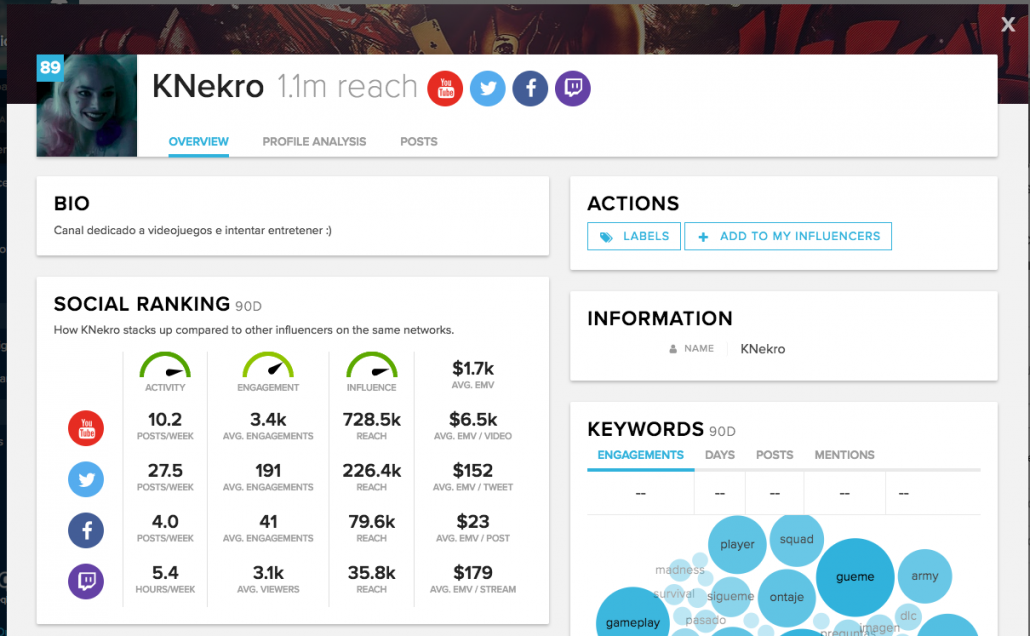 Gaming is a huge market where fans want to see content and find new products, and brands want to engage with potential customers. There is a perfect influencer on a perfect platform for your business, it’s just about discovering them, something that happens to be Sideqik’s specialty.