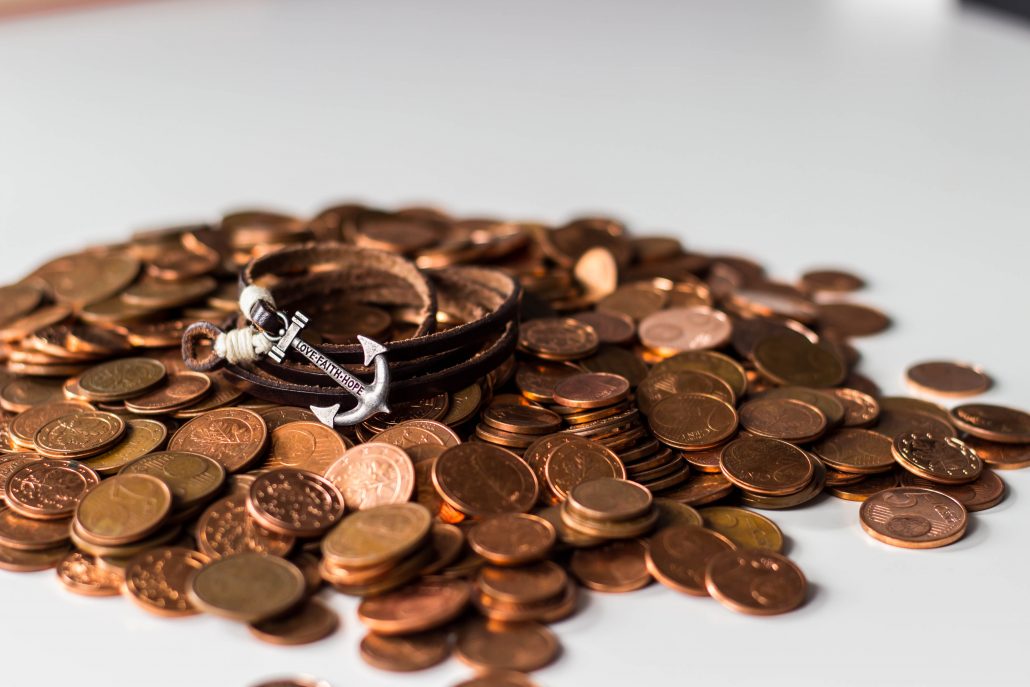 What Should you Pay Influencers for their Work?

There are many ways to work with influencers. You can offer them free product, only work with true brand advocates, or co-create content. But as many influencers look to turn their social media into their full-time job, a common question comes up. What should you pay influencers for their work?

A recent decade-long study by a professor at the Offenburg University of Applied Sciences in Germany found that based on ad revenue alone, 96.5 percent of YouTubers don’t make enough to reach the U.S. federal poverty line. That means when it comes to ads, for every Lilly Singh, aka IISuperwomanII, there are 27.57 other vloggers and video-makers who don’t reach $12,140 a year. Comparatively, the top 3 percent of YouTubers bring in more than $16,800 a year in advertising revenue.

Those numbers still aren’t that big. Which doesn’t match with the high-rolling lifestyle many social media influencers have led us to believe they live. That’s because brands like you pay influencers. Which brings us back to our original question, how much should you pay?

You see, what you should pay influencers has to do with many different factors. These include their audience size, their business acumen, their engagement rates and your business goals.

How to decide what to pay influencers as a business

Like any other marketing spending, deciding what to pay influencers all can come back to some simple math.

As a marketer, you know that exposure and engagement have value to your brand and multiple touch points are required to drive a sale. But how do you measure that value? At Sideqik, we used a metric called Earned Media Value to solve that problem. Earned Media Value is a measure of how much money a brand would have needed to spend on paid media or advertisements to achieve a similar level of engagement to what an influencer provides. This isn’t a perfect metric — the value of an influencer is often much higher than their posts Earned Media Value because an influencer has the trust of their audience and you are reaching a highly targeted audience that is part of their tribe. However, Earned Media Value does give you a benchmark by which to value social actions.

If you’ve decided to use Earned Media Value as a metric to measure influencer value, it can be hard to decide what values to assign. If you’re a brand that regularly uses paid media, you can simply measure what you spend on media and calculate the average impressions and engagements you receive as a result. We provide some benchmark values in a chart below, but we recommend brands calculate their own internal metrics whenever possible. In our calculations, an impression is worth less than a cent, while a share on Facebook is worth more than a dollar. These dollar amounts make it easy to set goals based around money spent, an easy version of ROI. 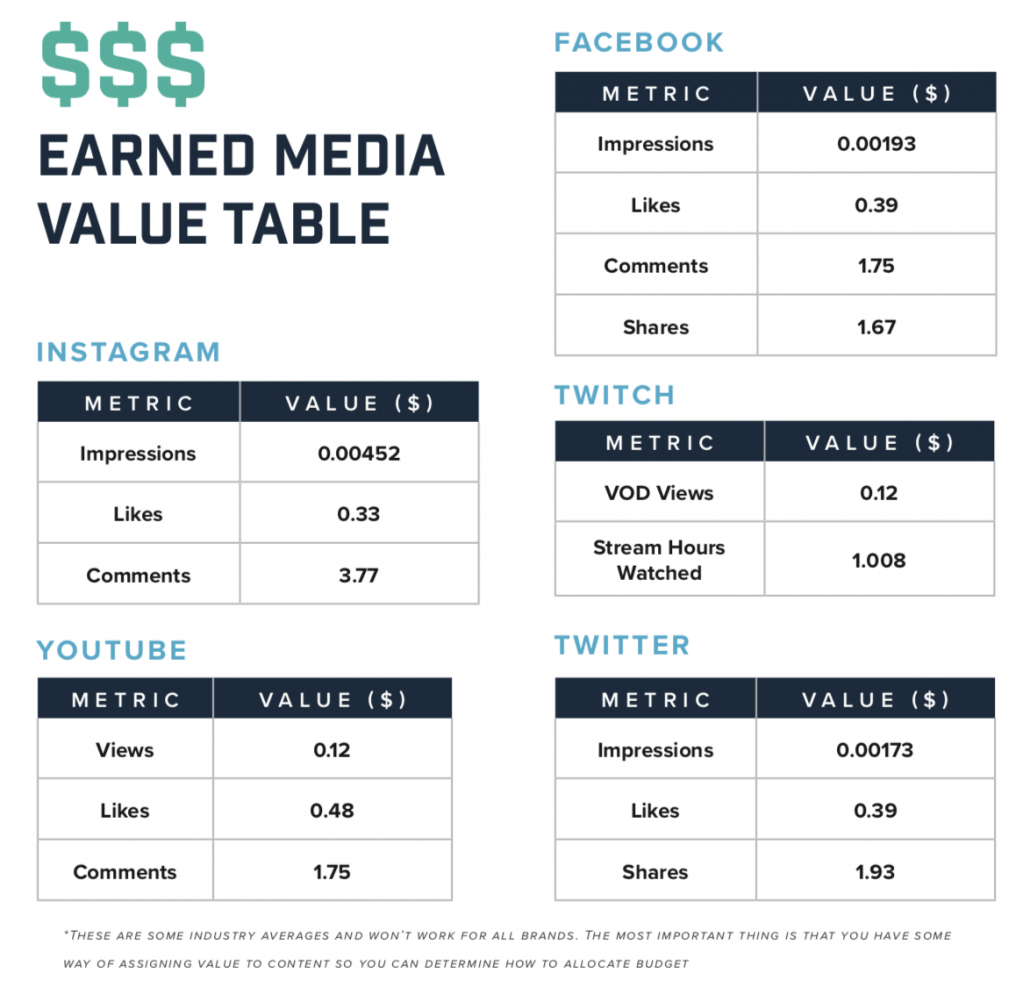 Now that you know an influencer’s Earned Media Value, it’s not too hard to do some division to know what your budget for an influencer post is. Determining what your margins should be, you can reverse engineer what ROI you want to receive from an influencer.

Other ways of valuing influencers

For ecommerce companies, and other B2C brands that can directly link sales to influencer activity, you may want to base what you pay on the value of a conversion. If an average order size is $100, and you expect one our of every 10 people who see an influencer’s post to make a purchase, you can use these numbers in combination with an influencer’s following size to determine what you should pay an influencer.

Sideqik offers suggestions for what an influencer’s average post is worth that can give you a ballpark range of what to negotiate when working with an influencer, but it all varies. Sometimes influencers are just excited to work with your brand.

As an influencer, how to know your worth

If you’re an influencer and you’re wondering what your value is, there are a few places to start. First, is the Earned Media Value calculation above. Crunch the numbers and see a rough estimate of what your content is worth.

Secondly, it can be good to look at industry averages. While your followers may be the most passionate, and your Instagram may be well curated, you’re operating in a very competitive space. So it’s best to know what the going rate for a post is.

According to Later.com, 66 percent of brands report that they pay under $250 per post from an influencer. Another 27 percent say they pay between $250 and $1000.

Often we only hear about superstars and their six-figure brand partnerships, but for the influencers who work every day, the ones below the poverty line in terms of ad revenue, most deals are smaller.

Another resource for influencers is Influencer Marketing Hub’s great Instagram Influencer Earning’s Calculator. Both brands and influencers can use this tool to check estimated earnings based on the follower number and engagement rates of an influencer’s last 12 posts.

So what do you pay?

Ultimately, we can’t tell you what to pay influencers. Every brand’s budget and goals is going to be different. The most important thing is that you need to have metrics to back up your decision. Things like follower growth, engagement rates, and conversion rates will all help you better determine what to pay influencers. All of this can be calculated by hand, but if you want some help, consider Sideqik. 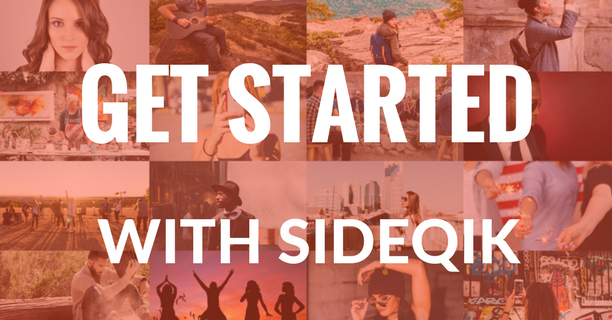