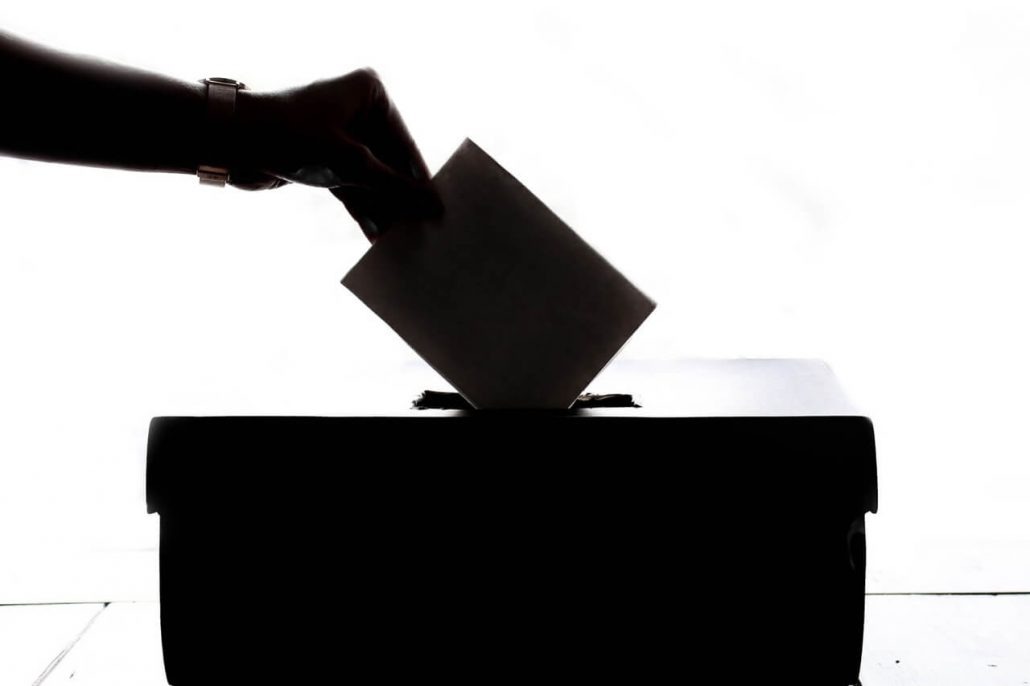 [INFOGRAPHIC] What Marketers Can Learn From the 2020 Democratic Campaigns

Politics are a form of business. The advertisements and engagement sought out by the 2020 Democratic candidates serve as a perfect example of the overlap between these two industries. Candidates must raise money, build their brands, and engage with social consumers to meet their eventual goal.

Can marketers learn anything from the campaigns of these presidential candidates? With the youth vote so in question, absolutely. Marketers and politicians alike have had to adapt the way they communicate through advertisements to better appeal to a generation that’s motivated not only by frugality but by an investment in their identities and communities.

What marketing wisdom, then, do the Democratic presidential candidates have to share with your business?

As of July 2019, the Democratic presidential candidates include:

In such an extensive crowd, each candidate has to actively work to differentiate themselves not only from their Republican and independent opponents but from one another. One of the easiest ways to do so is through their social media outreach. 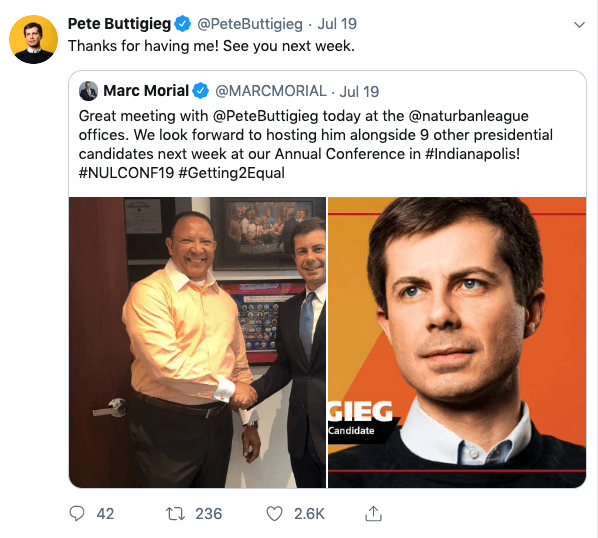 Voters respond to the way political advertisements address them. Like today’s consumers, most voters prefer personalized advertisements to broader work with mass-appeal.

What’s the difference between these platforms?

Warren’s posts, much like her tweets, use the first person and actively describe her campaign goals, making this content more personal than that of her peers. Buttigieg also uses the first person but also takes advantage of a number of videos, emulating his YouTube presence.

Comparatively, Joe Biden’s Facebook presence operates through his foundation and prefers the royal “we” to an “I.” While this “we” has the potential to inspire a sense of community among voters, it seems as though it’s less successful when compared to the “I” used by Buttigieg and Warren.

Simple things like the rhetorical choice of “I” over “we” help personalize passionate political ads. By crafting your advertising campaigns with the personal in mind, you’ll be able to make stronger claims about your products and better connect with your consumer audience. 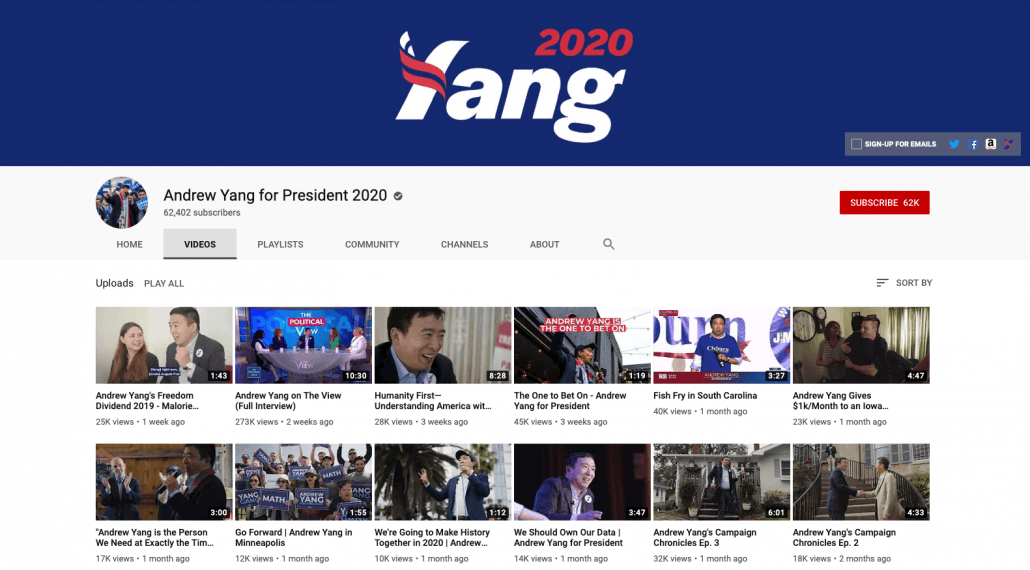 Video content is on the rise in marketing and in politics. It’s through videos, though, that both parties have the chance to see greater audience interaction. Even so, only fifteen of the twenty mentioned presidential candidates currently have active YouTube accounts. While all parties are investing in traditional political ads, there’s a discrepancy in the connectivity between those who are familiar with video content and those who are not.

For example, Andrew Yang, a veritable unknown, sees the most public interaction through YouTube. Tulsi Gabbard and Bernie Sanders aren’t far behind.

Yang sees the most engagement likely because of his focus on empathy. Sanders, though, actively taps into youth voters’ drive to see active communal change from the United States government. Tulsi’s frequency of posting keeps voter eyes on her page, too.

Your business needs to strike a balance between empathetic video content and a regular posting schedule to see similarly successful social engagement with consumers.

Your consumer audience – and politicians’ voters – are already online. To find them and win them over to your cause, you need to seek them out.

Enter social media. Facebook sees over 1 billion active users on a daily basis. Twitter 321 million monthly users active through its platform. The presidential candidates who’ve made the most social impact have been able to use these platforms and others to their advantage.

Under-utilization makes it more difficult for politicians – and business owners – to reach millennials and baby boomers alike, simply due to the popularity of the Internet and the expanse of Internet up-time.

Consider the social media outreach of the 2020 Democratic candidates. Elizabeth Warren, for example, sees an average Twitter engagement of 7,213. Competitor Pete Buttigieg sees 23,420.  Regardless of that divide, both parties vastly outrun competitor, John Delaney. Delaney has failed entirely to take advantage of Twitter as a medium and generates no engagement at all through the platform. This is a mistake that politicians and businesses alike can make. Success doesn’t come from sitting out of the game – you have to wade into the weeds and experiment to start connecting with an audience.

Visual mediums engage voters’ – and consumers’ – aesthetic sensibilities while also serving to create a story around individual candidates. Enter the success of Joe Biden on platforms like Instagram. Biden currently stands out in Democratic polls, offering more conservative Democrats a familiar name and face to vote for.

His Instagram pushes this moderate image. Biden plays to resilient Americanism, denouncing the current president while also emphasizing his love of less controversial topics, like football, fireworks, and children. As he intersperses this personal content with descriptions of his potential policies, he reaches out to a family-oriented demographic in an attempt to win over voters.

While Biden’s Instagram is hyper-specific, that specificity comes with benefits. Businesses looking to connect with specific audiences can take this media tailoring and storytelling – that is, the creation of a business narrative based on aesthetics and limited text content – to heart and focus in on the priorities of a particular demographic to win their approval. 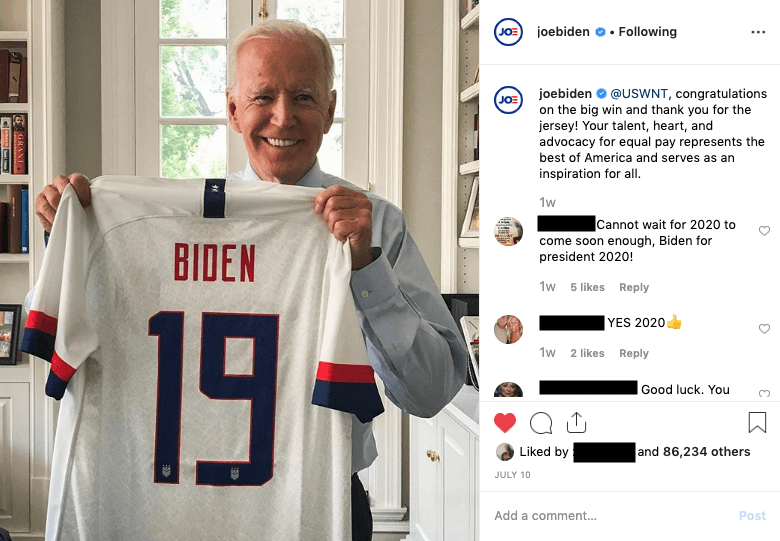 The Impact of Deliberate Engagement

The rewards for candidates’ social media efforts aren’t only seen in their social media followings. Engagement and fundraising go hand in hand. When a candidate chooses to utilize genuine engagement to connect with voters, they see a greater influx of funds to support their campaign.

Take Pete Buttigieg. While Buttigieg falls behind Bernie Sanders in terms of social media following, he makes up for it in donations. Buttigieg’s first person rhetoric and deliberate social media outreach netted him $24.8M in Q2 of this year.

It’s not reach, then, that determines whether or not a marketing campaign will be successful. The rhetoric used to style that campaign has just as much of an impact on its success as the size of the audience it reaches.

Not every Democratic presidential candidate has a social media marketing campaign worth emulating. A key few, though, display a focus, personal connection, and content schedule that’s garnered their campaigns significant success. While that success won’t truly be measured until the Democratic primary, marketers in the world of business can take advantage of these examples now.