[NEW DATA] Influencers are the New Social Circle: What it means for influencers

Social media technology has come a long way since Facebook’s first inception in a Harvard residence hall and since Jack Dorsey tweeted the first tweet in 2006. The way consumers use social media has evolved as well. 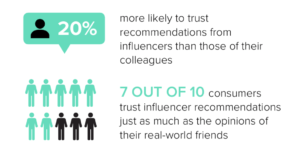 Most channels initially began as a way to keep in touch, share with family and friends, or publish your content into the world, Each channel has evolved based technology updates but also how users have adopted (or not) certain features and forced social platforms to cater to the ways people use them.

In Sideqik’s latest ebook, “The 21st Century Social Circle,” we examined how social media has changed, the different way users spend time on each channel, and what that means for influencers across platforms. [Tl;dr? Download it here.] 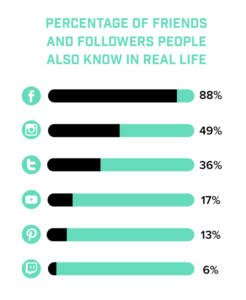 Facebook says its mission is “to give people the power to build community and bring the world closer together. People use Facebook to stay connected with friends and family, to discover what’s going on in the world, and to share and express what matters to them.”

Our data proves that this holds true even 15 years into its existence. In fact, 88% of people on Facebook say they log on to keep up with real-life friends, while less than half of users on all other platforms use them to connect to people they know in real life.

But the sharing of moments on Instagram has led to more than just snapping a well-lit picture of your avocado toast. Our exclusive data shows that the majority of users log in to Instagram each day to gain an inside view of celebrity/influencer lives.

This means it’s one of the best and easiest places for influencers to build their audiences, increase authenticity, and promote brands.

According to its own data, 326 million people use Twitter every month, but only 36% of Twitter users actually log in to tweet to people they know in real life, according to our data. The real reason users go to the platform to keep up with the latest news.

Other data shows that Twitter is the number one platform for government leaders. According to a 2018 Twiplomacy study, 187 governments and heads of state maintain an official presence on Twitter.

It makes sense that’s where people go to hear the latest on the world, celebrities, sport, and more with trending hashtags and Explore options in the new Twitter UI.

While YouTube began as a place to share your content with the world, our data shows that most people actually go to the video site for honest reviews of products and brands.

What’s the next best thing to ordering a product to try for yourself? Getting the info from someone who has. YouTube visitors get to see a product and hear a real person describe the pros and cons of it for them. It’s like a virtual referral.

The key to this use of YouTube is trust–users have to trust the YouTubers reviewing products and brands. You can learn more about what builds trust between influencers and consumers in our ebook. Download it here.

Pinterest describes its platform as a catalog of ideas. According to their site, their mission is “to help empower people to discover things they love and inspire them to go do those things in real life.”

You can follow what your friends and family are “pinning” and chat with them about ideas or pins on this visual social network. But most people go to Pinterest to discover tips and tricks or get inspiration for things in their own life.

Many influencers have found success on Pinterest as a supplement to other social networks and blogs (especially those around home, food, art, travel, design, etc.). Some top Pinterest influencers include Oh Joy! (Joy Cho), Poppytalk, and Hair and Makeup by Steph. You can see how these influencers promote their own properties on Pinterest and how it can easily crossover into promoting other brands.

Twitch is all about creating a community online through live streaming. Originally focused on video games, Twitch has expanded to include live streaming almost anything including special events, talk shows and podcasts, music and performing arts, and much more.

It only makes sense, then, that our data confirms that most people go on Twitch for tips and tricks and inspiration in their own endeavors. Whether users are looking for tricks to beat the next boss, watching live podcast recordings, or letting someone else test a new recipe first, Twitch influencers have the chance to build trust with their viewers through honesty, community, and authenticity. 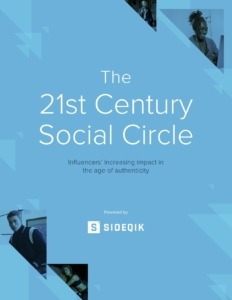 Want to know how much authenticity is too much for influencers? Read the rest of the data and find out what it means for influencers. Click here to download our complimentary ebook “The 21st Century Social Circle” for even more data.